[Note: this is a February (sneaking into March) series on the diverse themes and characters in Deborah Wiles’s books. I’m publishing the series during Black History Month, with the full knowledge that my books are written from a white person’s point of view (as I am white), and that every month is Black History Month. For more on that, see this essay by Michael Harriot at The Root. To read about the need for diversity in children’s literature, explore We Need Diverse Books online, whose mission statement is “Putting More Books With Diverse Characters Into the Hands of More Children.” You can buy the books I mention below at your local independent bookstore, at Amazon or B&N, or check them out at your local library. More about each one (including a buy option) is at the links I provide below. Part 1 of this series, Freedom Summer, is here. Part two, about the Aurora County books, is here. Part 3 about the Sixties Trilogy is here. Thanks to all of you for reading and commenting and following along. The essays in this series will become anchor posts on my website blog, Field Notes.]

[[below is a spread of primary sources from the last scrapbook in Anthem, describing the buildup to the Kent State murders on May 4, 1970.]] 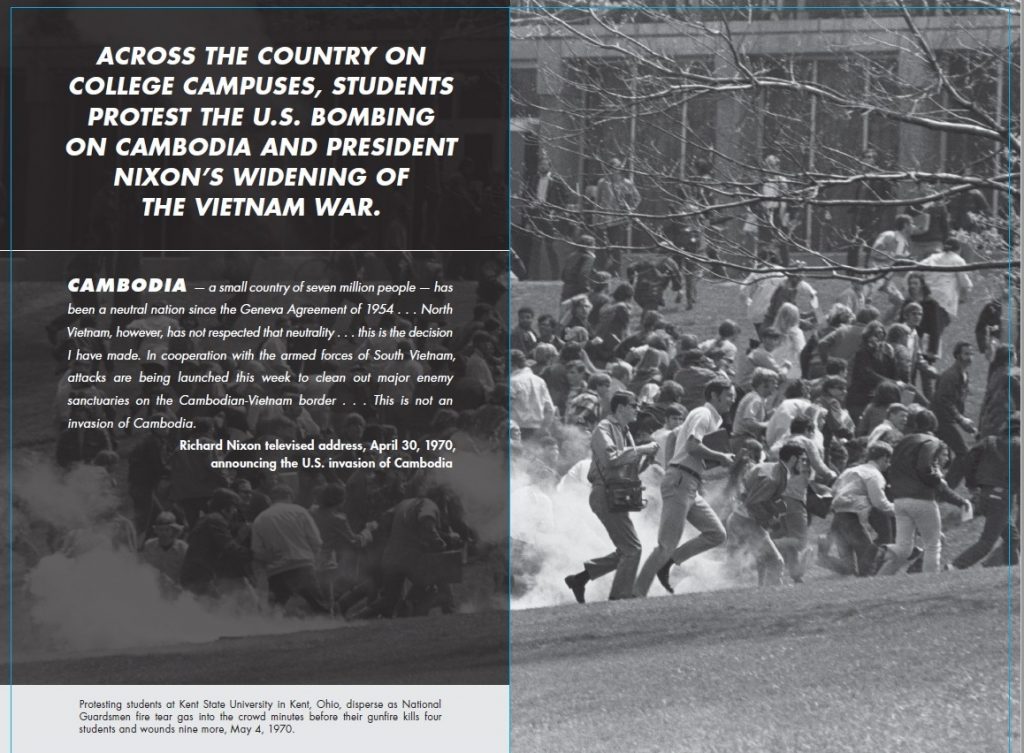 “I can’t believe they shot those white kids.”

This is a line spoken by a black man on May 4, 1970, in Kent, Ohio, after the Kent State shootings, when the Ohio National Guard opened fire on college students — teenagers — who were protesting, on their campus, Nixon’s invasion of Cambodia during the Vietnam War.

“You see a man in a uniform holding a rifle — you know there are bullets in that rifle. We were taught that from the cradle. You go the other way.”

These lines are taken from oral histories with black students who were at Kent State University on May 4, 1970.

“We didn’t think they had real bullets. We thought they had blanks.”

I could see the juxtaposition and inequities in these statements right away, as I researched this story, and I could see the parallels they held to today.

67 shots fired in 13 seconds by the Ohio National Guard into a crowd of unarmed students in their schoolyard: That’s Kent State in a nutshell, but it was about so much more, of course.

I came to write this book because I was a teenager myself on May 4, 1970, in high school in Charleston, South Carolina, 3 days shy of my 17th birthday, and stunned that such a thing could happen in this country. We all were. What happened to freedom of speech, assembly, petition, and press? All of these rights were violated on this day when 9 students were wounded, and 4 were killed.

While researching Kent State, I visited the campus and the May 4 Visitors Center, as well as the Special Collections May 4 Archive, where I first encountered the role of BUS — Black United Students — at Kent State. I write about this in the Author’s Note in the back of the book, so I won’t belabor it here, but it was impossible to tell the long arc of the story of the Kent State killings without including BUS and the killings 11 days later of two black students at Jackson State College in Mississippi.

[[below: racial profiling by the local police, of Kent State students in the sixties and seventies. “Very intelligent; can speak to groups.” And “Parents are well-behaved people.”]] 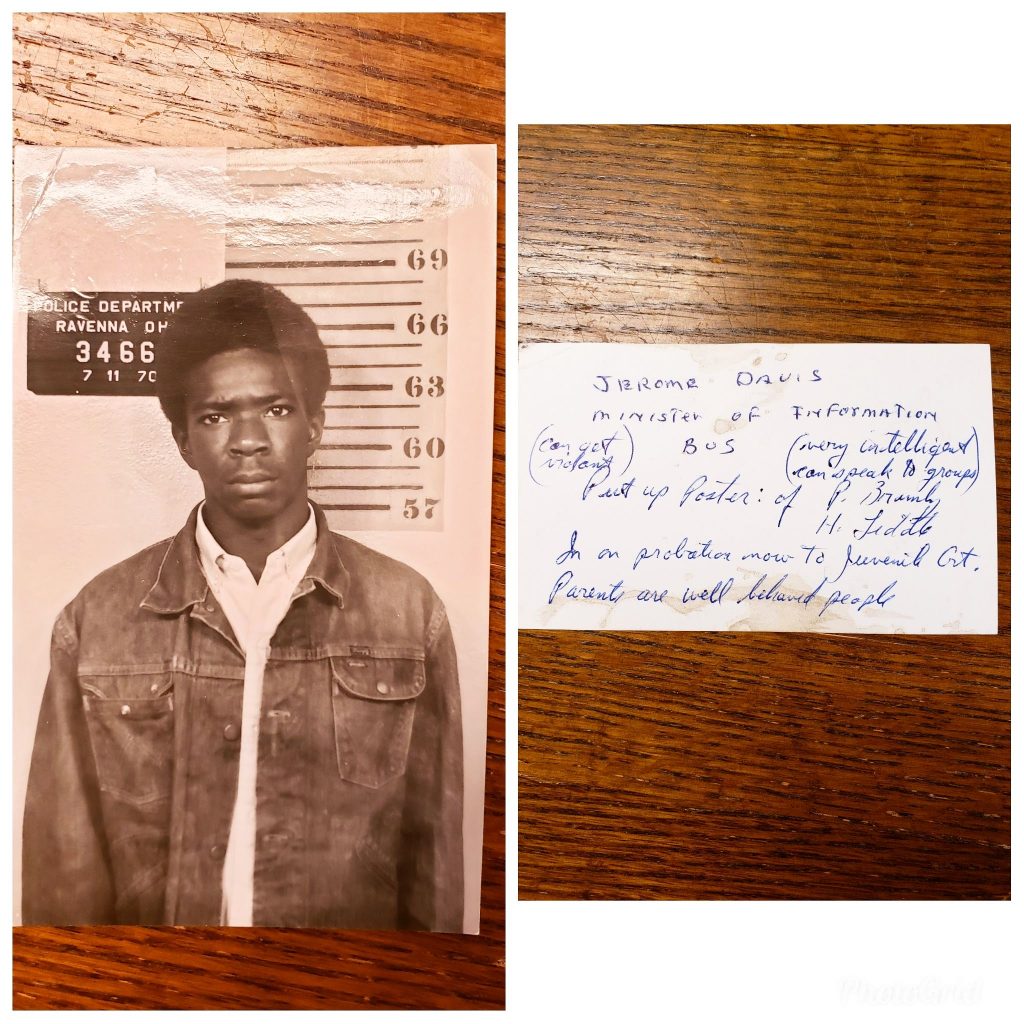 That long arc became apparent to me when Kent State Professor Emeritus (and a student witness to the shootings) Laura Davis shared with me the 108-page National Historic Landmark nomination for Kent State’s May 4 history — the site, the buildings, and the arc of history that Kent State found itself part of, when the State begins to kill its citizens: The Boston Massacre and Wounded Knee before May 4, to name just two, then stretching forward, beyond May 4, 1970, to the connections to police brutality, mass incarceration, and school-and-public shootings today.

It all came together in a diverse way when the pieces began to fall into place for this story. Whereas I had used so many primary source documents and photos in every Sixties Trilogy book — Countdown, Revolution, and Anthem — I knew that this new story needed a different treatment. Even though I would use many, many primary sources to help me tell this story, I wouldn’t burden the narrative with them. I wanted the story to come to the reader clean, clear, elegant, and eloquent, about such a violent act.

[[below, from the Kent State May 4 Special Collections archive]] 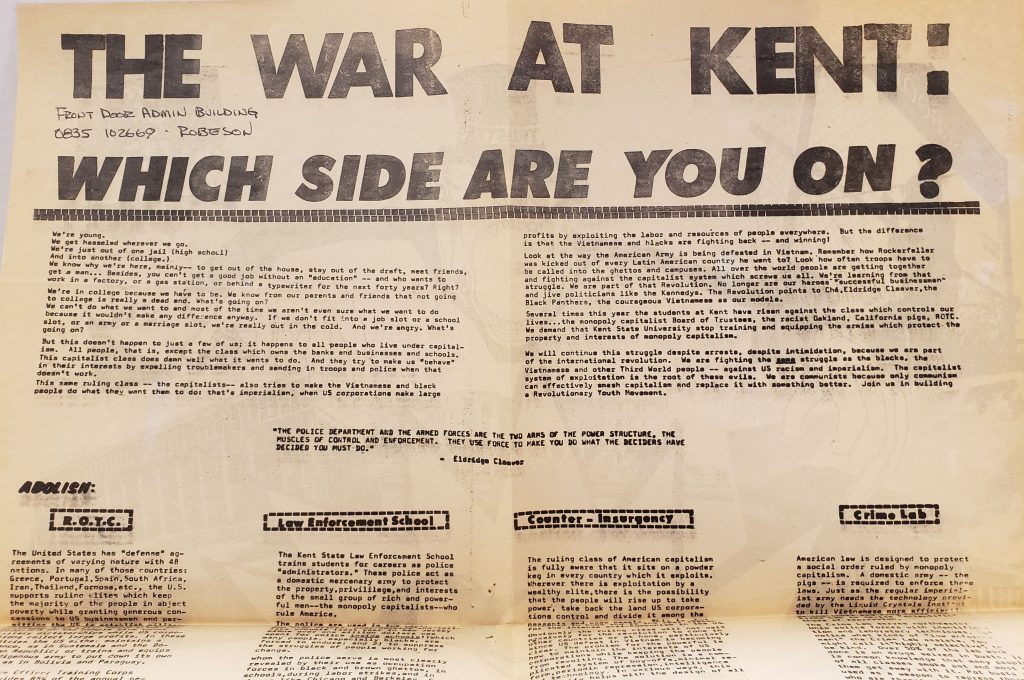 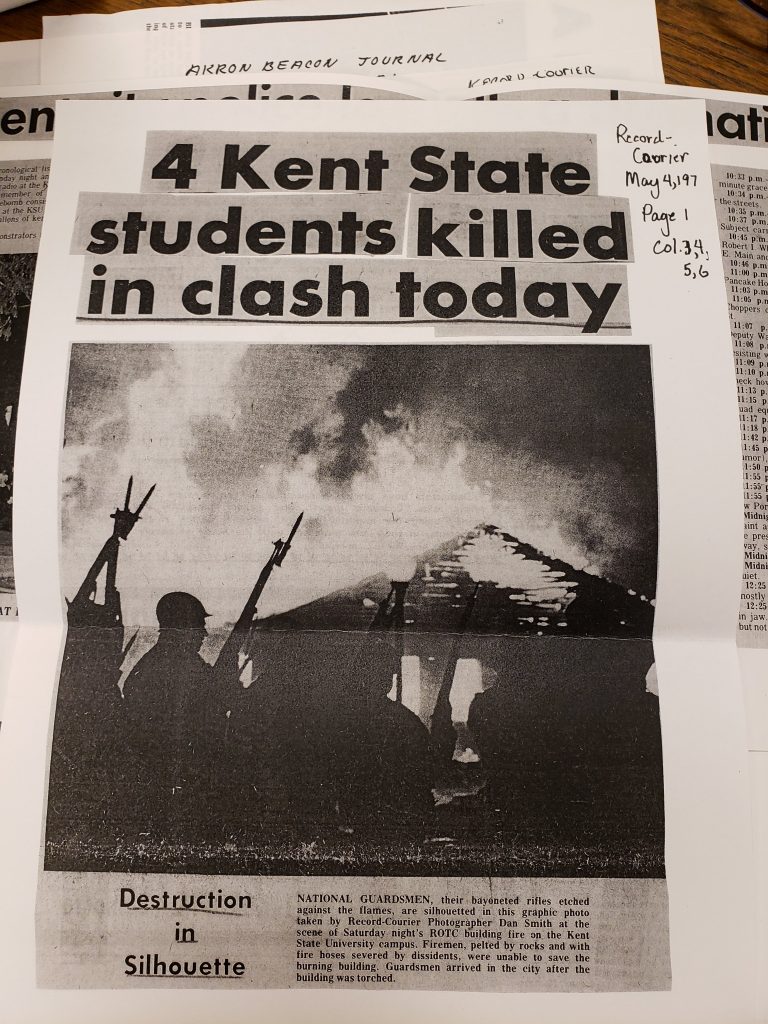 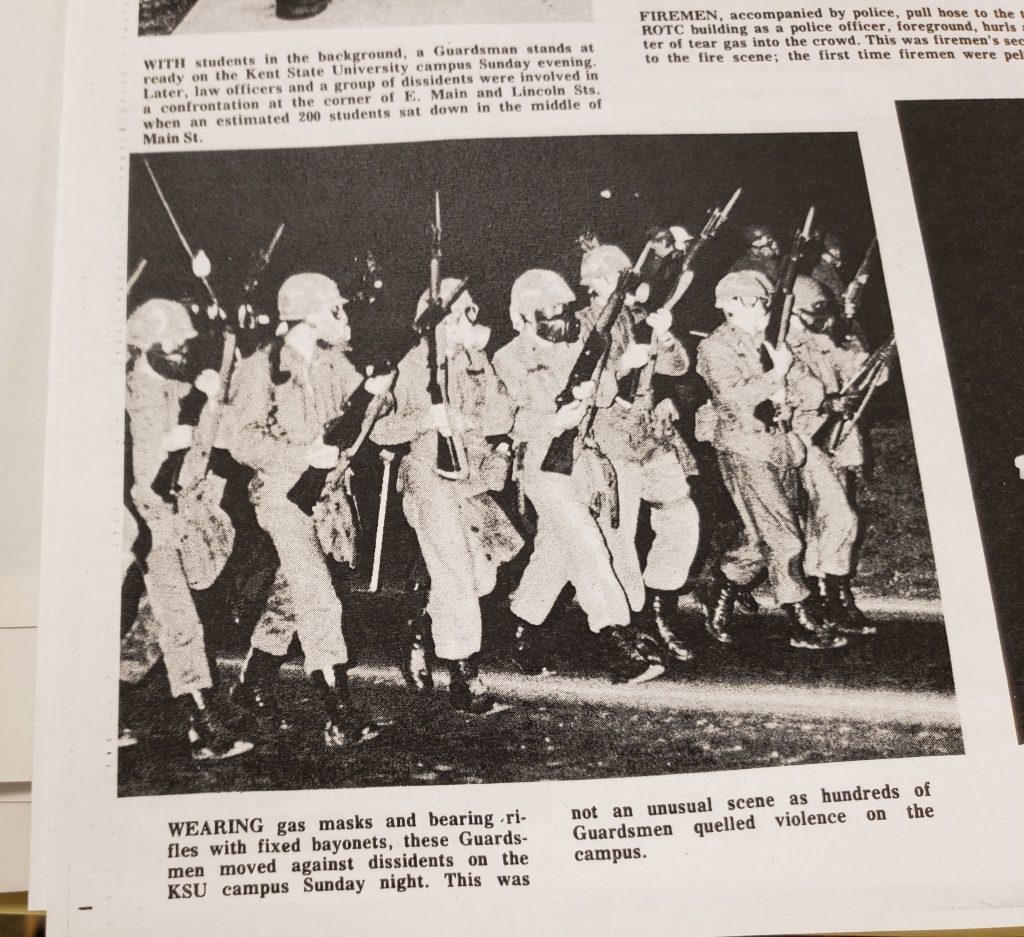 In talking with my editor about how to structure the story, I mentioned how much I had admired his use of the Greek Chorus in Two Boys Kissing, and we both waxed enthusiastic about George Saunders’s book Lincoln in the Bardo, with its many disembodied voices and so much diversity — of class, race, culture, generations, background… it was a masterpiece, I said, and as I did, the lightbulb went off.

[[below: A letter to the editor of the local paper from a Kent Citizen (townie) on the 20th anniversary of the killings [sics left as-is]: “I saw in the paper that you wanted people to write in about the May 4th tradgedy at Kent State. I think that it was the most disgraceful thing since the crucifiction of Jesus Christ. That the kids took over and the law was not respected. I say goody goody for the ones that were killed, or wounded, these should of been more. A disgrace put on to a pieceful town.”]]

Kent State is edited by David Levithan and published by Scholastic Press. It will be released on April 21, 2020. It is written as a form of lineated prose, with no named narrators, from various points of view, all telling the story of those four days in May when America turned on its unarmed children in their schoolyard and shot them. The different voices are distinguished by their typefaces and tight, specific characterizations, each a stand-in for a differing point of view.

You hear from townies and faculty, students black and white and National Guardsmen, from everyone who had an opinion on what happened, gathered as a collective memory of that time-and-place — for that’s how all history is remembered, isn’t it? In a form of collective memory that is embellished, incorrect, truthful, strident, opinionated, formed and unformed, and left for future generations to parse. Who is right? Who is wrong? What is true? What is fake? It is a question for our time.

I use a fictional story in the each of the Sixties Trilogy books to highlight that collective way of storytelling, but in Kent State, I was much more spare, while packing in a lot more memory and opinion. I also draw a straight line from the Kent State killings to today’s culture of violence in this country, and I ask young people to “insert your name here.” To stand up, to get involved, and to be agents of change.

Black and white. Latinx and of Asian descent. Muslims, Christians, Jews, and all faiths, and the faithless. Gay and straight — all identities, all colors, all experiences, Americans all, who have the right to assemble, protest, petition, and write, call, march, vote — especially vote, but also to create sustained protest for a broken system.

Those four deaths, Allison, Jeff, Sandy, and Bill, do not have to be forgotten or in vain. What is happening today in our country in terms of state violence and mass incarceration — particularly of people of color and the poor — and indiscriminate shootings does not have to be our future. 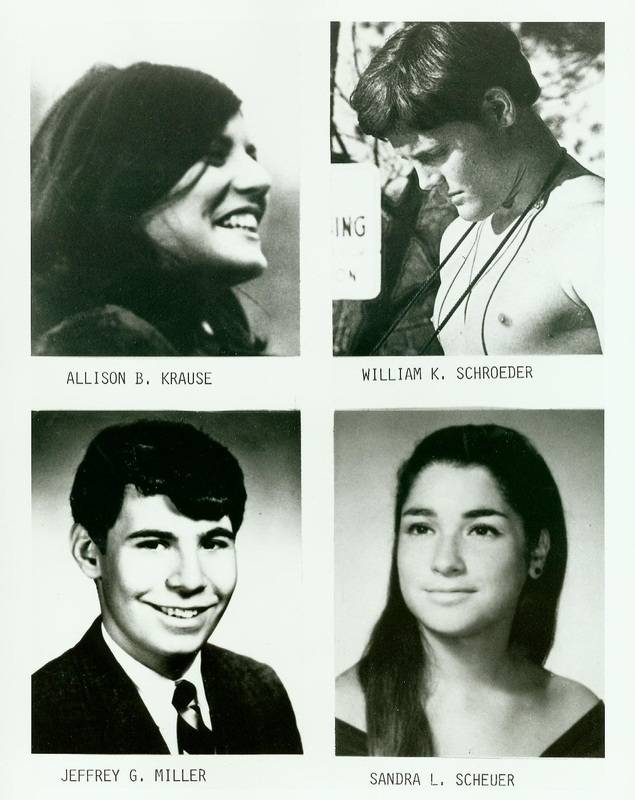 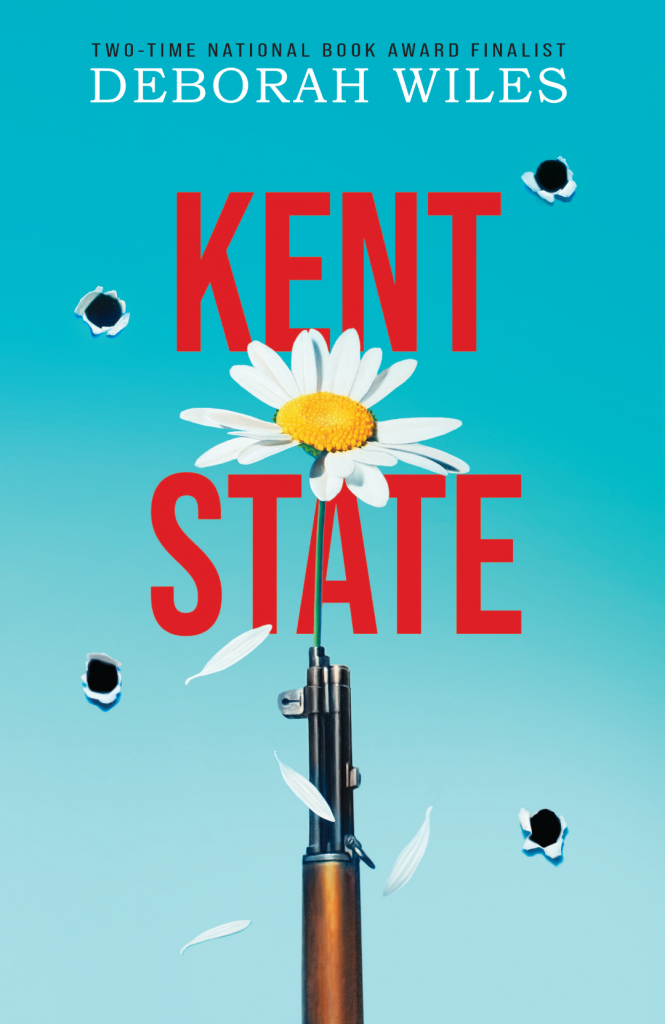 I said in my last post that I would talk about diversity in my future work as well as Kent State, but I think I’ll save it for another post. For now, I’ll say that I’ve waded back into picture books — it has been 17 years since I had a published picture book — those Sixties Trilogy books required All Hands On Deck for 12 years — and 19 years since Freedom Summer’s publication. The three picture books that are coming are all long years in the making, close to my heart, and close to the diversity of the world in one way or another… but more about that later. Thank you for coming along with me on this topic. It was useful to me to think about it, and write about it, and reach for clarity in my own mind and heart and writing — which is what I’m always doing, with any story I write. xoxo Deborah Wiles