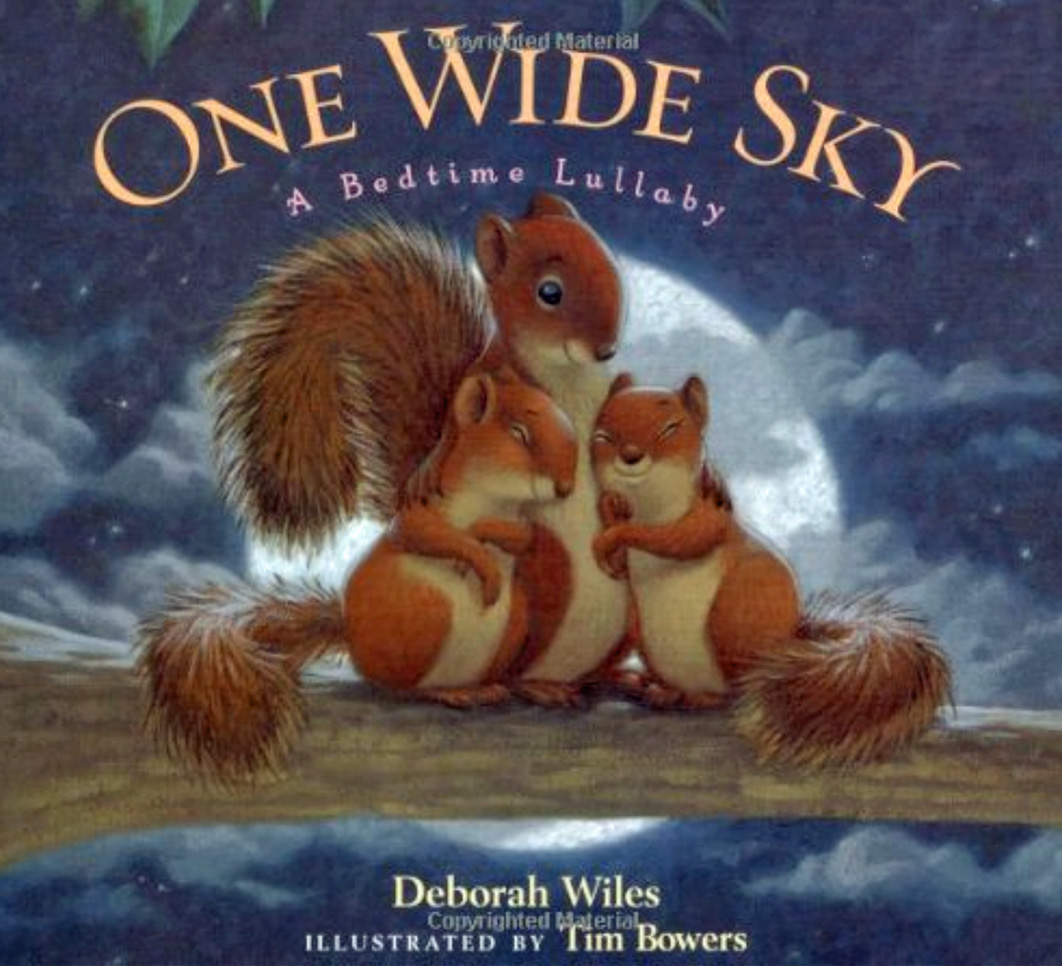 Published by Harcourt, Inc. 2003
A Children’s Book of the Month Club book

A perfect day of backyard adventures unfolds and then slowly comes to an end. Moonlight fills the sky. Time for a soothing lullaby. Count down to bedtime with three lively boys all wrapped in warm kisses, and two mischievous squirrels who are snuggled up close, as they finally drift off into sweet dreams … under one wide sky.

Critically acclaimed author Deborah Wiles and talented illustrator Tim Bowers have created a loving and lyrical lullaby that introduces simple counting–and that will send little ones everywhere off into sweet dreams.

Praise for One Wide Sky

“The expansive summer sky that hangs over an idyllic backyard may get the title mention, but the real stars of this outdoor counting book are two young squirrels that appear in every spread (and who are referenced only once, as “two sleepyheads” near the end of the text). They cavort, observe, scavenge and stay a few steps ahead of a trio of boys and a mother, while Wiles (Love, Ruby Lavender) enumerates the backyard’s charms forward and backward in rhyming couplets: “Nine clovers for a crown./ Ten whirligigs spinning round./ Nine shadows butter the yard./ Eight fence posts standing guard.” Bowers’s (the Little Whistle series) velvety oils chronicle the changing summer light as it deepens to a starry indigo. At the same time, he seamlessly blends detailed, heightened realism (seven sandbox dump trucks look as if they’ve been marooned in mounds of sugar) with subtly anthropomorphized comedy (the squirrels sport Chip and Dale–like expressions, and one beams a proud smile as it exhibits a nearly unbroken bread crust discarded by one of the children). The visual and verbal elements weave together all the components into a kind of sunlit tapestry: a clover garland made by a child in late afternoon transforms into a goodnight gift for the human mother, just as the squirrels’ booty becomes a late night snack shared with the mother. A fitting tribute to the pleasures of a perfect day. Ages 2-5.”
— Publisher’s Weekly

“From the huggable cover illustration clear through to its end, this comforting bedtime lullaby will hold you in its grasp.” ­
— Children’s Literature

”There’s much to savor: bubbly prose (a little girl ”twinkles” down some steps, House ”bulldozes” to a stage); a dog named Eudora Welty and a kid named Parting Schotz; a wonderfully convoluted plot involving an old man”s death ‘at the simmering time just before daybreak,’ a sheaf of Walt Whitman quotes; a Fourth of July pageant; lots of baseball lore; and a cliffhanger of an all-star game that brings the whole town together. As one character sighs, ‘It’s positively Thornton Wilder.’ But it’s Thornton Wilder on a sugar high–and that’s some high.”
­—The Washington Post Book World

One Wide Sky is out-of-print but available used or at your local library. It makes for gentle bedtime reading as well as teaching in the home school or elementary school classroom. The book is 88 words written in rhymed couplets, counting 1 through 10 and back to 1 again, a hymn to nature, family, and the outside world. Concepts: Morning-noon-night, counting up and backwards, rhyme, beginning-middle-end, and using art to tell a story that complements the text and that is not contained in the text.

Music by Jim Pearce, available from www.jimpearcemusic.com, or free, along with a copy of the book, when schools book an author visit.