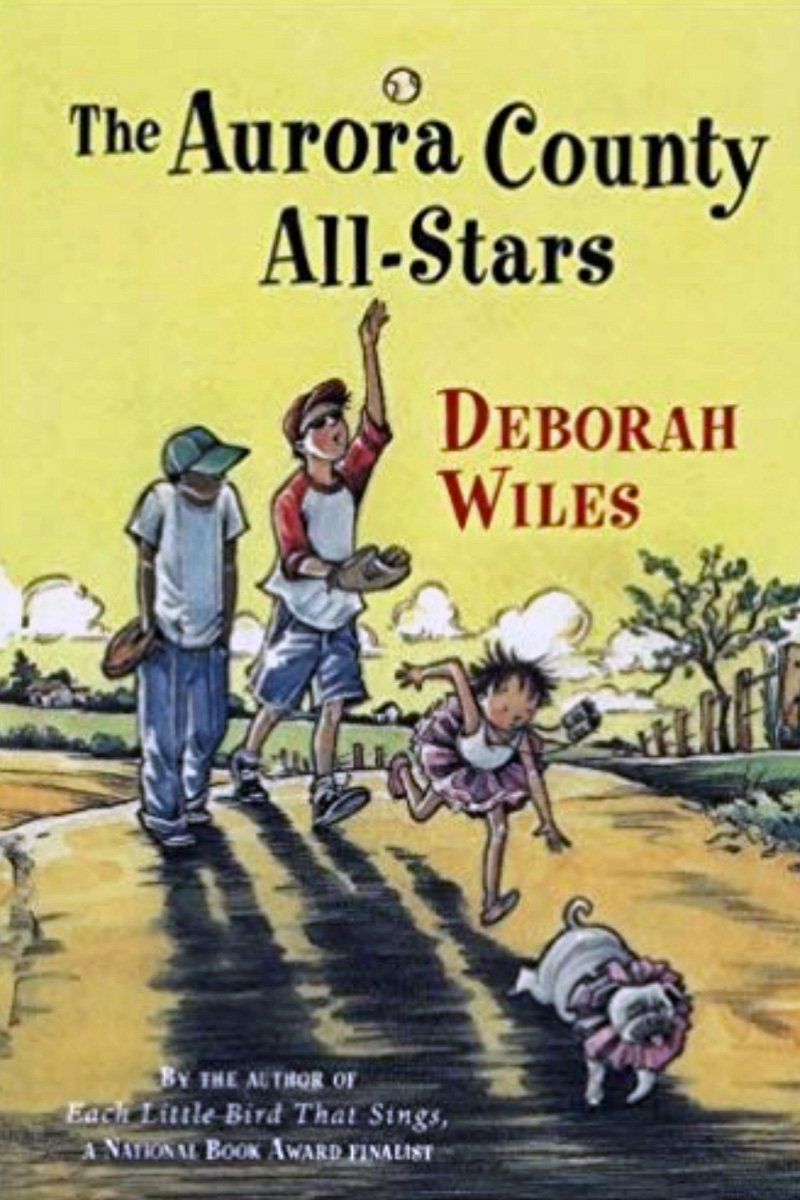 Pip sniffed. “I wasn’t allowed to play because of the color of my skin,” he said in a flat voice. “Just like ol’ Satchel Paige—best pitcher who ever lived—wasn’t allowed to play in the major leagues, had to stay in the Negro leagues nearly his whole career. I couldn’t play with the white boys.”
— The Aurora County All-Stars

House Jackson, age twelve, star pitcher and team captain of the Aurora County All-Stars, has a secret. For the past year, while sidelined with a broken elbow, he has spent every afternoon at the bedside of a mysterious old man the other kids call Mean-Man Boyd—and he doesn’t want anyone to know. Now House is finally ready to play ball again, but wouldn’t you know that the team’s only game of the year has been scheduled for the exact same time as the town’s 200th-anniversary pageant. Now House must face the pageant’s director, full-of-herself Frances Shotz (his nemesis and perpetrator of the elbow break), and get his team out of this mess. There’s also the matter of a mysterious old recluse who has died and left House a wheezy old dog named Eudora Welty—and a puzzling book of poetry by someone named Walt Whitman. In the standoff that ensues, House finds a courage he didn’t know he possessed—and discovers that just about everyone in Aurora County, Mississippi, has a secret. Through the long, hot month of June, House makes surprising and valuable discoveries about family, friendship, poetry… and baseball.

Praise for The Aurora County All-Stars

”The game play and the lingo are fun, as is the rambunctious farce.”
—Booklist

”A slow-simmering stew of friendship and betrayal, family love and loyalty, and finding oneself.”
—School Library Journal

”There’s much to savor: bubbly prose (a little girl ”twinkles” down some steps, House ”bulldozes” to a stage); a dog named Eudora Welty and a kid named Parting Schotz; a wonderfully convoluted plot involving an old man”s death ‘at the simmering time just before daybreak,’ a sheaf of Walt Whitman quotes; a Fourth of July pageant; lots of baseball lore; and a cliffhanger of an all-star game that brings the whole town together. As one character sighs, ‘It’s positively Thornton Wilder.’ But it’s Thornton Wilder on a sugar high—and that’s some high.”
­—The Washington Post Book World

NPR Interview with Michele Norris for All Things Considered

Cleebo streaked from home to first. He hurled himself forward and reached for te bag. his body scraped the dirt and raised a tornado of dust as he slammed into first base, where Wilkie Collins cought the throw from Evan Evans and takked Cleebo squarely on the bean.

“He’s out!” screamed Wilkie. He hoisted the ball heavenword and crow-hopped around the base like he was on fire.

“You’re blin, Wilkie!” yelled Cleebo, dusting himself off and swelling with pride. “I was safe by a country mile!”

“Good play at first, and good catch, Wilkie!” shouted House from the pitcher’s mound. “But Cleebo got there first. He’s safe.”

“Now watch me steal second!” gloated Cleebo. “I’m on a roll! Just like Jackie Robinson!” His clothes were coated with grit.

House shook his head. “You don’t slide into first, how many times do I have to tell you?”

“He likes to slide, said Ned. “It gives his mama more laundry to do.”

Cleebo swiped at Ned, but Ned bobbed out of the way.

“You gotta catch now, Cleebo,” said House. “We don’t have enough players to let you run the bases, and I need Boon in the outfield—Ned’s a power hitter.”

“I’m always the one to sacrifice!… I should be playing first,” said Cleebo.

“That’s for sure, said Cleebo.

“I can!” Striding toward the mound with her catcher’s mitt on her left hand came Ruby Lavender.

“… these children couldn’t wrap their heads around the idea of discrimination against African American players but we discussed it openly and it went well. I have to tell you that a book like the one you’ve written really needed to be written. It is so expertly researched and has really made me think.”
— A librarian shepherding her middle-grade book club